The 42-year-old Filipino icon, coming off a decision over Keith Thurman in July 2019, was negotiating to face MMA star Conor McGregor but that fight fell out after McGregor lost in the octagon. Then there was talk he might meet lightweight Ryan Garcia but that never materialized.

Now he seems to be re-focused on an earlier candidate, Mikey Garcia.

Garcia told television interviewer Jo Ankier in an informal interview after the Canelo Alvarez-Avni Yildirim fight Saturday that he and Pacquiao are near a deal to fight in May, although neither Pacquiao nor a credible representative has confirmed Garcia’s comments. 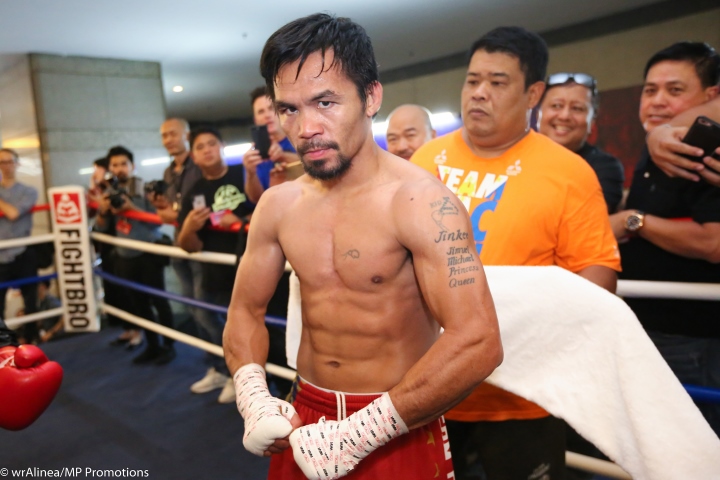 “We’re finalizing all of the details,” Garcia told Ankier. “We hope to get the exact date and location in the next few days. We’re trying to get everything done for May. It’s been in the works for a long time, particularly more in detail in the last year.

“Now, in the last few weeks, we’ve been getting very close to working on this and finalizing it. I’m pretty excited. We’ll have all of the details set in the next few days. It’s a matter of time. So far, it seems like all of the parties are on board. I’m excited for it.”

Many believe Garcia (40-1, 30 KOs) is an ideal opponent for Pacquiao (62-7-2, 39 KOs) because he’s a small welterweight – like Pacquiao – and he has a strong track record, having won major titles in four divisions.

The Los Angeles-area fighter rebounded from a one-sided loss against Errol Spence Jr. in March 2019 to comfortably outpoint Jessie Vargas in February of last year. That was his most-recent fight.

Pacquiao won the WBA version of the 147-pound title by defeating Thurman by a split decision even though he was 40 years old at the time. The senator has been devoted much of time to COVID-19 since the pandemic took hold.

On this day :Mike Tyson Fight with Evander Holyfield is on for May 29