Since arriving on the doorstep of trainer Freddie Roach’s Wild Card Boxing Club in Hollywood in 2001, Pacquiao (57-5-2, 38 knockouts) has won belts in seven of his record eight weight divisions.

Even now, more than six years later, Pacquiao can barely believe he made a 12-pound jump from lightweight to welterweight to fight De La Hoya.

Pacquiao weighed 142 for his first fight above 135 pounds, and told The Times after stepping off the scale, “Speed will be the key to this fight.”

“Pacquiao again corners De La Hoya with a sharp combination. De La Hoya’s attempted jab was in vain. De La Hoya is clearly drained, and worse, he’s wounded by a big Pacquiao left. A De La Hoya combination elicits a taunt from Pacquiao, who raises his arms, urging on the ex-champ and unleashing a final flurry at the end of the [ninth]. The blood under Oscar’s left eye is flowing freely.”

“Tonight, we turn a page in boxing history.”

Every fighter needs a signature moment.

For Pacquiao, his came in a second-round knockout of Hatton on May 2, 2009, at MGM Grand. 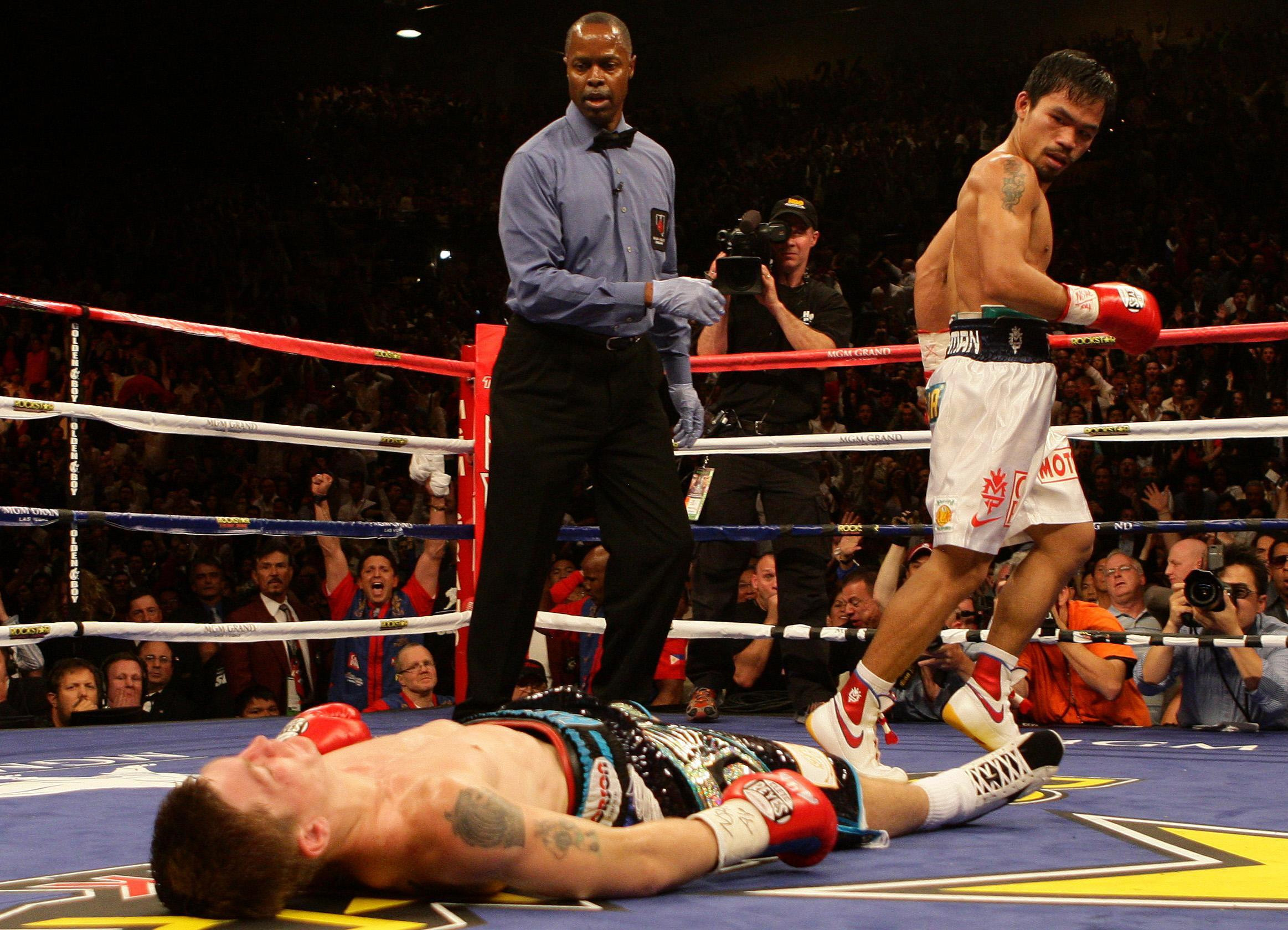 Yet, Roach was extremely confident of victory.

“He looks so good,” Roach said of Pacquiao a day before the fight. “In a workout this week, he did everything in the game plan perfectly. I believe we’ll knock [Hatton] out.”

Hatton was taken to a local hospital for treatment, but told someone in the ring, “I really didn’t see the punch coming.”

There’s a constant tug inside the best boxers, a challenge they hear from fans, reporters or themselves.

In the third round, Cotto threw a left that Pacquiao sidestepped while touching Cotto enough to merit a knockdown when Cotto went to the canvas on one knee.

Cotto couldn’t keep up in the toe-to-toe exchanges, and Pacquiao was too fast to allow Cotto to punish him to the body, and by the ninth round Cotto was bleeding from his nose.

Swollen under both eyes, and blood gushing from his left, Cotto took some more punishment in the 12th before referee Kenny Bayless decided that was enough, stopping the fight 55 seconds into the round.

The former flyweight Pacquiao was a true welterweight champion.

Was Pacquiao taking on too much, considering he won a lightweight (135 pounds) belt in the summer of 2008? Margarito was five inches taller, his reach six inches longer. 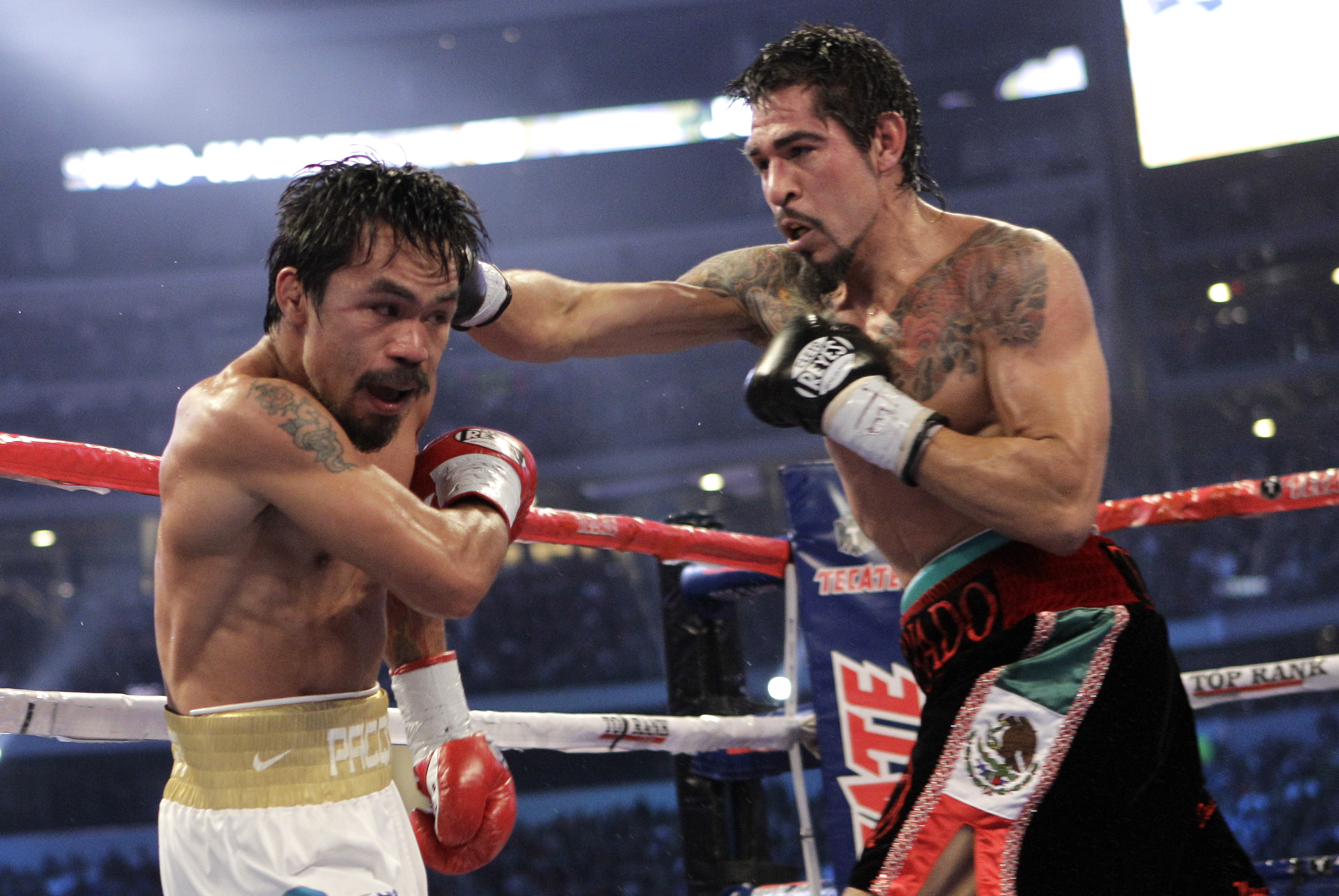 But Pacquiao’s hand and foot speed, along with his punching power, provided the ultimate answer.

“If that had been Mayweather in there tonight, Manny would’ve killed him,” Pacquiao publicist Fred Sternburg said.

Pacquiao’s win gave him a super-welterweight championship and a record eighth world title.

The more experienced Barrera, a former featherweight champ, had lost only one fight (a split decision) in the past five years. 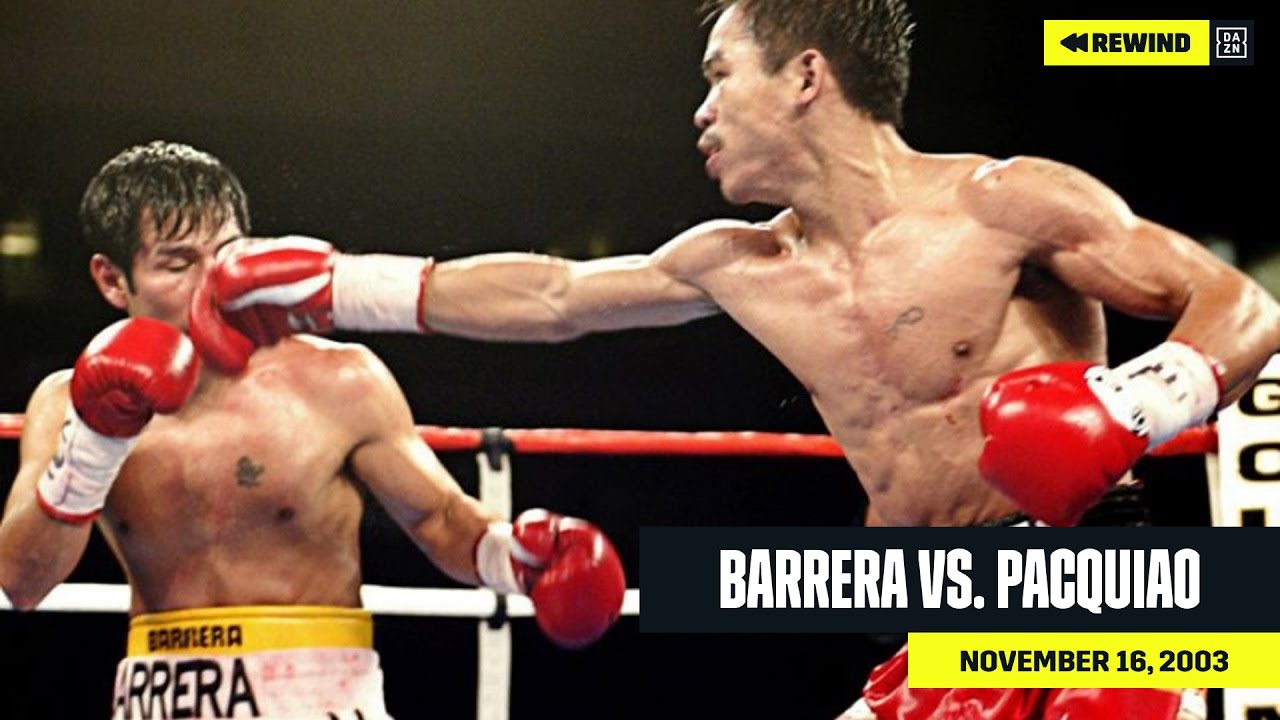 But Pacquiao trounced the big favorite, dominating the second round with a flurry of heavy punches that would become familiar to fight fans in the coming decade.

Will Smith Remembers Muhammad Ali: “You Changed My Life”