The future Hall of Fame fighter took on Timothy Bradley for the third time this past Saturday, walking away with a unanimous decision win and a seemingly leaving the boxing world behind him. Is it for good? Maybe, maybe not – Pacquiao himself makes it clear that he doesn’t know if he will enjoy being retired and if he doesn’t, then he’ll be back. But for now, he’s done. And that means now is a good time to examine the legacy he leaves behind.

Looking back at Pacquiao’s career, it’s helpful to consider it in 3 separate parts. First was his rise up the ranks, where he rose from a very young man fighting in the Phillipines to a major international boxing star. He had some major fights in here including against the likes of Erik Morales, Juan Manuel Marquez, and Marco Antonio Barrera. He became an A side PPV attraction and put together a 47-3-2 record. He won titles from Flyweight to Lightweight. If this was his entire career, he would have plenty to be proud of and would still be in the discussions as a Hall of Fame candidate. But it’s only a piece. 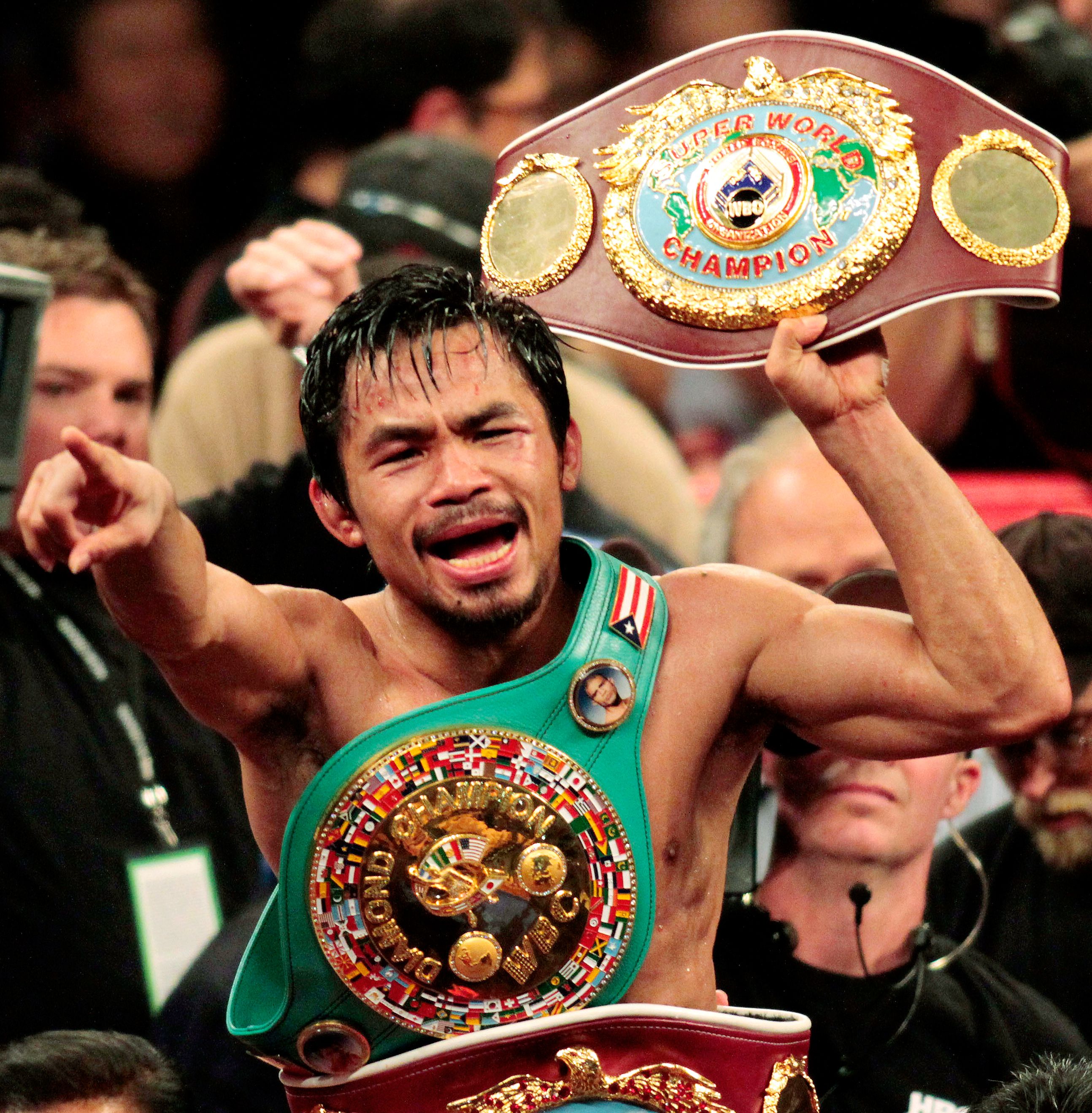 In 2008, he defeated and retired Oscar De La Hoya, and a megastar was born. For the next three years, Pacquiao could do no wrong, as he dominated every opponent, pulling in 1,000,000+ PPV buys on a regular basis. This was a man many argued was the best in the world, and a true international sensation.

Then 2012 happened. Pacquiao lost a terrible decision to Timothy Bradley, was knocked out cold by Juan Manuel Marquez, and the image of the superstar was shattered. He’s built it back with some good wins, including his defeat of Bradley this weekend in his best performance since routing Shane Mosley in 2011, but even the most die-hard Pacquiao fan has to see his late career as a bit of a slide, with the “loss” to Bradley and huge loss to Marquez plus some outside the ring controversy that has not helped his image.

Then of course there’s the Mayweather fight.

Boxing’s fight of the century was talked about for years and years, and just when we thought it would never happen, it did. Manny Pacquiao vs. Floyd Mayweather. Two once in a generation fighters who just so happened to be fighting at the same time at the same weight. The battle to truly determine who was the greatest of our era. And Pacquiao never had a chance. The most shocking thing about the fight as it played out wasn’t that Mayweather won, it’s that Pacquiao was never more than just another opponent to Floyd. Sure, Pacquiao was no longer at his peak, and sure, Mayweather cherry-picked the right time to fight him, but there’s no denying the outcome, and that outcome makes it hard to argue that Mayweather is not the superior fighter.

Yet to look only at today sells Manny Pacquiao short. It’s also the legacy of a man who took the world by storm when he came to the US. Of a man who made millions of fans tune in to watch him fight – and a man who made those fans tune in not by “promoting” his fights, but by FIGHTING his fights. People didn’t watch Pacquiao because of his hype interviews or his posturing, they watched him because he entertained. Because he stepped into the ring with great fighters, and when he did, he showed off incredible technique that simply befuddled them. And he did all of this weighing less than 150 pounds, fighting in weight classes that fans often ignored.

At the same time, it’s also the legacy of a man who could never convincingly defeat Juan Manuel Marquez, yet who had great wins over fighters like Erik Morales and Marco Antonio Barrera. Again, it’s complicated.

In the end then, Pacquiao should go down in history as this: not a true all-time greatest ever, but an elite and wildly popular fighter with high level skills that propelled him to become the #2 fighter of his era – an era that just happened to include an even better #1. There are worse legacies to have.

MANNY PACQUIAO VS. ERROL SPENCE JR.: WILL PACQUIAO RETIRE AFTER HIS NEXT FIGHT? WHAT’S NEXT FOR THE BOXING LEGEND