There were not enough superlatives to describe the excitement in the lead-up to the super fight between Floyd Mayweather and Manny Pacquiao, but in the end, the action in the ring did not live up to the hype. And what could the boxing world really have expected?

The fight here at the MGM Grand Garden Arena was vintage Mayweather. He ducked under Pacquiao’s flurries. He side-hopped out of the corner when his opponent attempted to lunge at him. And every now and then, Mayweather thrust his right fist squarely into Pacquiao’s skull, or swept his left glove across the side of his face as if clawing skin from Pacquiao’s cheek.

While Mayweather (48-0) had been prone in recent fights to standing in the middle of the ring and scrapping it out with his opponents, he clearly reverted to his old ways on Saturday night, perhaps a sign of his respect for the threat that Pacquiao (57-6-2) posed to his undefeated record. The casual fan may not have liked it. But this was a boxing aficionado’s tactical dream. 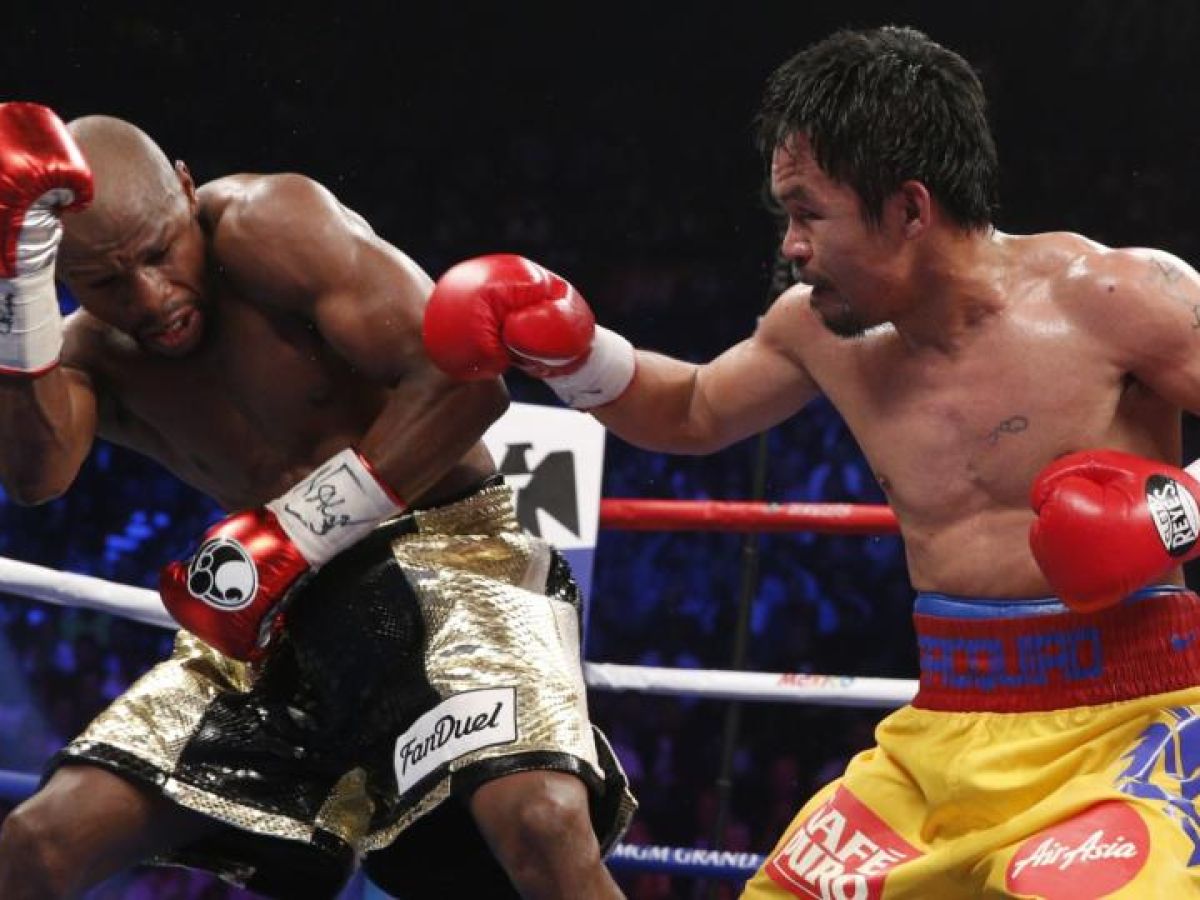 “I outboxed him,” Mayweather said after the fight. “I wasn’t getting hit with a lot of shots until I sat right there in the pocket. We did what we had to do tonight.”

While Mayweather won a unanimous decision by a large margin on the final scorecards – 118-110 on one; 116-112 on the other two – the fight actually did not appear easy to score.

Pacquiao spent much of the night stalking forward toward Mayweather, while the undefeated champion tap-danced around the ring. In a few instances, Pacquiao cornered Mayweather and unleashed punches in waves, but Mayweather either grabbed Pacquiao or slid out of the way.

The fans booed regularly when Mayweather would hold Pacquiao or when he would backpedal away from the action. So while it may have looked and sounded as if Pacquiao was doing damage to Mayweather, the judges were forced to look closely, tune out the noise and determine whether Pacquiao was indeed scoring against Mayweather.

“I thought I caught him many more times than he caught me,” Pacquiao said. “I was never hurt.”

In fact, however, it was Mayweather who threw and connected more punches. According to CompuBox fight stats, Mayweather landed 148 of 435 punches (34 per cent), while Pacquiao landed just 81 of 429 (19 per cent).

Sometimes, it did not seem that way, because the crowd that was more in favour of Pacquiao stood and cheered every time he got even close to Mayweather, even when those punches did not connect. In a couple of instances, Pacquiao backed Mayweather into the ropes by connecting with a straight left hand. And then Mayweather stood on the ropes, hand clutched close to his body, as Pacquiao whaled his fists like a drummer beating out a power ballad.

But those punches did not penetrate Mayweather’s guard, and he simply looked at Pacquiao, shook his head and said, “Nope.” It was a classic rope-a-dope.

While the cheers of the fans and Pacquiao’s aggression might have been enough to induce many fighters to become more aggressive, Mayweather did not take the bait. Not even as his father, who is his trainer, urged him to be more aggressive, he said.

“Manny Pacquiao is a tough competitor,” Mayweather said. “He’s a very awkward fighter, so I had to take my time and watch him really close.”

In one scene typical of what transpired during the fight, Mayweather, in the ninth round, huddled in the corner, right hand to his cheek and left arm in front of him as if holding a shield, as Pacquiao leaned in and bounced like a wrestler preparing to grapple. Pacquiao then pounced, lunging with his right jab, followed by other flailing punches. Mayweather struck with two quick punches, swooped to the ground and then slid out of danger.

Earlier in the fight, Mayweather, as he did many times throughout the bout, grabbed Pacquiao as he leaned in to punch, holding his head down. As the referee separated them, Pacquiao cocked his body and furrowed his eyes in anger.

Oscar De La Hoya, the boxing great who has fought both Mayweather and Pacquiao, said that fighting Mayweather could be frustrating if you keep swinging and missing. And Pacquiao clearly seemed to be showing some frustration, as Mayweather refused to allow him to connect on any series of clean punches.

The early rounds were expected to be crucial in how the fight played out. If Pacquiao could push the pace as he prefers and win early in the fight, it would force Mayweather to be more aggressive and perhaps open up his vaunted defence to give Pacquiao openings.

But the trick that no one has ever been able to solve against Mayweather is how to get in close on him to land good punches. Freddie Roach, Pacquiao’s trainer, said he wanted his fighter to move side to side and try to get in on Mayweather at awkward angles. Pacquiao did do a lot of bobbing and weaving, but each time he sprang in on Mayweather, it seemed as if Mayweather had an answer.

Whether it was to hold or to stave him off by sticking out a straight right hand with his longer reach or to step out of the way, Mayweather kept his body and face clean of any real punishment. He also kept the fight clean of any of the brawling excitement that the many casual fans who tuned in might have been looking for.

To some, that was boring. But to Mayweather, it was exactly what he wanted.

Mayweather vs Canelo: Boxing fans vote for who would win in their primes

Muhammad Ali proved he was truly the world’s champion