The Undertaker vs. Sting is often regarded as the greatest wrestling dream match that never happened, and for good reason.

Both men portrayed horror-themed and cryptic characters, and there were plenty of similarities with their on-screen personas. For years and years, fans and pundits held out hope that these two legends would one day square off in the middle of the ring.

But Sting and Undertaker competed in different promotions during the Monday Night Wars; the former with WCW and the latter with WWE. When Vince McMahon eventually bought out WCW, Sting chose to sign with TNA – ending the possibility of a dream match with Undertaker for over a decade.

Following his illustrious tenure in TNA, Sting finally signed with WWE in 2014, debuting at the Survivor Series pay-per-view. Fans understandably grew optimistic about a Sting-Undertaker showDown at WrestleMania 31, but it never came to be.

During an interview with Comic Book, Undertaker revealed why the dream match never took place. He explained that although it’s “a super marquee match”, it simply wouldn’t have reached those sky-high expectations: 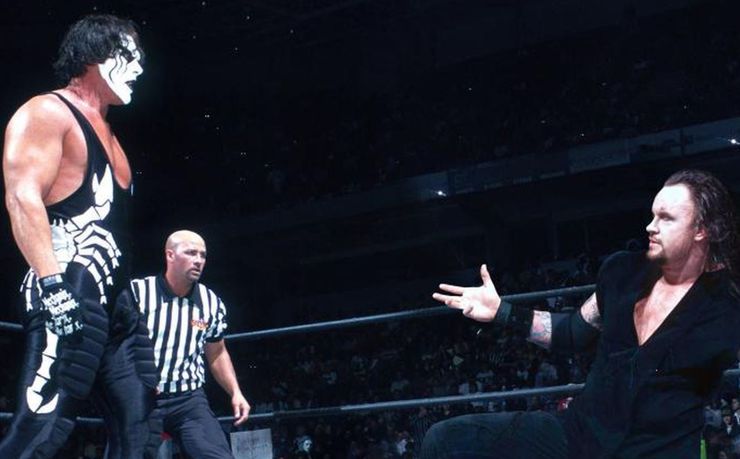 Undertaker instead faced Bray Wyatt in a winning effort, while Sting lost to Triple H in his first ever WWE match. Unfortunately, the latter was forced to retire after suffering a serious neck injury in a match against Seth Rollins at the 2015 Night of Champions pay-per-view.

There have been plenty of rumors and reports about Sting possibly coming back to wrestle for a match against Undertaker, but that opportunity is long gone. At last year’s Starrcast event, Sting reportedly stated that he would wrestle again for “the right price.” But as emphasized pointed out, the time for a match between the two is long gone.

WWE Missed A Great Opportunity
WWE had every reason to run a Sting-Undertaker match following the former’s debut with the company. They didn’t have to place Sting against Triple H, which many fans viewed as a reminder that he beat WCW in the Monday Night Wars. Fans wanted to see Sting vs. Undertaker for almost two decades, and WWE had the chance to put it on for us. It’s too bad that they never capitalized on the short window of opportunity for Sting vs. Undertaker.

Who has defeated Manny Pacquiao; A look back at his defeats